For nearly a quarter of a century, the Running of the Boots costumed fun run fundraiser has been a Sitka institution. But unless the Sitka Local Foods Network can find a partner organization or a big crew of volunteers, the race may not happen this year. Please help us keep the event going.

For those not familiar with the event, the Running of the Boots is a short costumed fun run in downtown Sitka where people run a short course wearing costumes and XtraTuf boots (optional). Usually the course isn’t much longer than running from the Totem Square end of Lincoln Street to the stoplight and back. Money is raised through an entry fee, and the Sitka Local Foods Network has hosted a small farm stand with late-season fresh local produce.

The Sitka Local Foods Network has coordinated the race for 11 years, but this year we just don’t have the board strength to get the event organized. Last year, to keep the event going, we partnered with the Sitka office of Big Brothers Big Sisters of Alaska, splitting proceeds. But the Sitka office of BBBS was closed earlier this year. This year we have two board members going on an extended honeymoon, another board member out of state at a conference the week of the event, and another board member who is pregnant and nearing her due date, so we need someone to step in and coordinate the event this year, and we’ll let you keep most of the proceeds from the race (if we can get our usual farm stand going, we’d keep the money earned from that).

The Running of the Boots has been part of the Greater Sitka Chamber of Commerce’s End-Of-Season Celebration the last several years, and this year that event is scheduled for Saturday, Sept. 22. It usually starts about 11 a.m. (with registration open at 10 a.m. and costume judging about 10:30 a.m.). The race is over by about 11:30 a.m., with awards taking until noon or so. There is some set-up and take-down time involved, and there is prep time leading up to the event where the coordinator meets with the Chamber to make sure all the arrangements are worked out and also contacting merchants to get door prizes.

We’d love to find a kid-friendly group to help share this event, and SLFN board president Charles Bingham will help with media and other promotion even though he will be out of town until the week of the event (he gets back Friday night before the race). If your group is interested, please contact Charles at 623-7660 or charleswbingham3@gmail.com. Let’s keep this fun event going.

It was rainy in Sitka on Saturday, Sept. 23 (stop the presses), but the rain didn’t dampen the fun during the 23rd annual Running of the Boots costumed fun run fundraiser for the Sitka Local Foods Network and Big Brothers Big Sisters of Alaska.

Runners and others met under a large tent in Totem Square park, where we also had a small farm stand with fresh, local veggies from St. Peter’s Fellowship Farm, music from the Sitka Blues Band, a table with info about Big Brothers Big Sisters of Alaska, people selling Sitka Community Playground raffle tickets, a tent selling garlic from Middle Island Gardens, and a mat for kids to hold sumo wrestling contests with padded costumes. 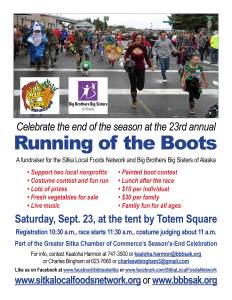 In recent years, the Running of the Boots has been an annual fundraising event for the Sitka Local Foods Network, whose mission is to increase the amount of locally produced and harvested food in the diets of Southeast Alaskans. The Sitka Local Foods Network operates the St. Peter’s Fellowship Farm communal garden, the Sitka Farmers Market, and hosts an education program that includes the family garden mentoring project.

The Running of the Boots is part of the Season’s-End Celebration festivities hosted downtown by the Greater Sitka Chamber of Commerce and the Alaska Cruise Line Association, where Sitka residents were served hamburgers, hot dogs, salmon and cole slaw to celebrate the end of the summer.

A slideshow of scenes from the 23rd annual Running of the Boots is posted below.

It’s time to dig your XtraTufs out of the closet and paint them up. The 23rd annual Running of the Boots begins at 11:30 a.m. (registration opens at 10:30 a.m.) on Saturday, Sept. 23, at the big tent near Totem Square park on Lincoln Street. This year the costumed fun run fundraiser benefits two local nonprofit organizations — the Sitka Local Foods Network and Big Brothers Big Sisters of Alaska.

This year, there will be more food, music and other tents staged near the start of the Running of the Boots, so it will have a more festive atmosphere. This change allows the race to be a bigger part of the Season’s-End Celebration festivities hosted downtown by the Greater Sitka Chamber of Commerce and the Alaska Cruise Line Association. In addition to the Running of the Boots, the Season’s-End Celebration includes a lunch from noon to 2 p.m. for Sitka residents featuring hamburgers, hot dogs, and fish. People are asked to make a $2 donation when they get their lunch, and the money raised will go toward a local community group or nonprofit to be announced.

So what is the Running of the Boots? It’s Southeast Alaska’s answer to Spain’s “Running of the Bulls.” Sitkans wear zany costumes and XtraTufs — Southeast Alaska’s distinctive rubber boots (aka, Sitka Sneakers).  For the past decade, the Running of the Boots raised funds for the Sitka Local Foods Network, a nonprofit organization that hosts the Sitka Farmers Market and advocates for community gardens, a community greenhouse, sustainable uses of traditional subsistence foods and education for Sitka gardeners. This year, it also will raise funds for Big Brothers Big Sisters of Alaska, which helps mentor local youth. 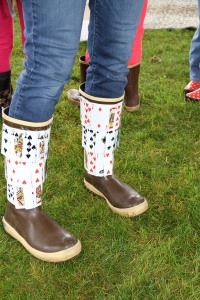 The Running of the Boots is a short race for fun and not for speed, even though one of the many prize categories is for the fastest boots. Other prize categories include best-dressed boots, zaniest costume, best couple, best kids group and more. The course starts at Totem Square park, and runners will run from one end of Lincoln Street to the other and back to Totem Square park (or, we may just run from Totem Square down Lincoln Street to St. Michael’s Russian Orthodox Cathedral, where runners will loop around the church and head back to Totem Square). There will be lots of prizes, including some new pairs of XtraTufs. There also is live music, and fun for the entire family. Some of the better costumes in recent years have been worn by adults.

The entry fee for the Running of the Boots is $10 per person and $30 per family, and people can register for the race starting at 10:30 a.m. Costume judging starts about 11 a.m., and runners hit the streets at 11:30 a.m. (NOTE: these times are a half-hour later than in recent years). As usual, local merchants have donated bushels of prizes for the costume contest. The Sitka Local Foods Network will host a farm stand booth with fresh veggies for sale from St. Peter’s Fellowship Farm. The booth takes debit cards, WIC vouchers and Alaska Quest (SNAP) electronic benefit cards.

To learn more about the Running of the Boots, contact Kealoha Harmon of Big Brothers Big Sisters of Alaska at 747-3500 or by email at kealoha.harmon@bbbsak.org, or Charles Bingham of the Sitka Local Foods Network at 623-7660 or by email at charleswbingham3@gmail.com. We also need several volunteers to help set up and take down the race (two needed) and to judge the costumes (two needed). Contact Kealoha to learn how to volunteer.

Do you support the local foods movement in Sitka? We are recruiting new board members and volunteers for 2021. Click the photo to learn more about us, or attend our next board meeting at 6 p.m. on Wednesday, March 10, using Zoom online meetings.