The Sitka Local Foods Network just sent out the June 2015 edition of its newly launched monthly newsletter. Feel free to click this link to get a copy.

This edition of the newsletter has brief stories about several new street food options in Sitka that are highlighting local seafood, a Blessing of the Garden ceremony at St. Peter’s Fellowship Farm, an update on a June 2 meeting for prospective and past vendors of the Sitka Farmers Market, and a reminder about the Plant a Row for the Hungry program. Each story has links to our website for more information.

You can sign up for future editions of our newsletter by clicking on the registration form image in the right column of our website and filling in the information. If you received a copy but didn’t want one, there is a link at the bottom of the newsletter so you can unsubscribe. Our intention is to get the word out about upcoming events and not to spam people. We will not share our email list with others to protect your privacy. 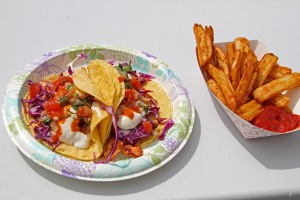 Over the past decade there have been a handful of summer pop-up street food options in Sitka. This year there are several new food trucks/carts in town, and locally sourced seafood is featured on the menu.

In past years some of the bigger street food options included Reindeer Red Hots (which this year will only do special events like the Sitka Farmers Market and Sitka Seafood Festival instead of holding its regular street corner), the Ludvig’s Bistro Chowder Cart (still serving lunch of clam chowder and salmon or prosciutto baguettes in the Mill Building by the Sitka Sound Science Center) and the short-lived Two Chicks and a Kabob Stick (which closed a couple of years ago, though you can still get the Inga’s Spice Blend fish rub developed for the food cart).

The most mobile of the new group of street food stands is Ashmo’s, a food truck owned by Ashley Moore specializing in Alaska seafood dishes. Ashmo’s has been parked out in front of the Coliseum movie theater on Lincoln Street for much of the summer. But the truck also has been available this summer at Baranof Island Brewing Company on Tuesday nights and for other special events (including the BIBCO community benefit night May 27 for the Sitka Local Foods Network), with occasional trips to the Old Sitka Docks, and by Eliason and New Thompson harbors.

Ashmo’s serves a variety of seafood dishes, with a menu that does change through the week. Among the mainstays are salmon mac and cheese, rockfish tacos, BIBCO beer-battered halibut, fish (cod) and chips, blackcod collars and rice, grilled king salmon and rice, and more. Salmon sliders and salmon tacos also have been on the menu on some days. Ashmo’s is usually open during the day in front of the Coliseum, and it also has been open late nights on weekends. Ashley usually posts a weekly schedule on her Facebook site. 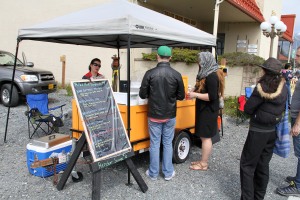 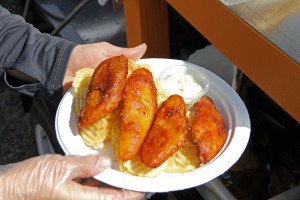 In addition, Heidi has a variety of chowders available (clam, seafood, or smoked salmon, depending on the day). For more information, call Heidi at 738-8504.

The Ráns Net pelmeni (Russian dumpling) stand actually came onto the scene in Sitka last summer, but this year owner Ayla Stromquist has a new building tucked into an alley on Lincoln Street across from Old Harbor Books and between Wintersong Soaps and the Cellar.

She also has a couple of new flavors of pelmenis. Last year she had two flavors — meat (beef and pork mixed) and potato. This year she’s added chicken, smoked salmon and cream cheese, and sautéed onions.

Kerry MacLane and his blackcod (sablefish) collars have been a mainstay at the Sitka Farmers Market for several years. But this year he has a tent from 10 a.m. to 2 p.m. on cruise ship days in the front lawn at Sitka Rose Gallery on Lincoln Street. Kerry just sells one item, his BBQ grilled blackcod collars (aka blackcod tips) over rice. Kerry will reopen his stand on June 1. For more information, contact Kerry at 752-0654. 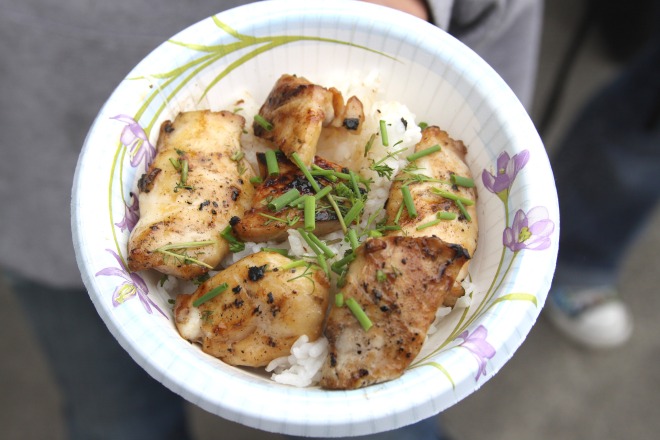 BIBCO hosts community nights on Wednesdays for a variety of community nonprofit organizations and worthy causes (only one group per night). The brewery donates a portion of the day’s gross sales to the cause depending on the overall sales (up to $500 gets 10 percent, $501-$1,000 gets 15 percent, and $1,001 or more gets 20 percent). The nonprofit groups are able to share information about their projects during the event.

The brewery is owned by Rick Armstrong and Suzan Hess, who started selling small batches of their beer in 2010. The brewery has grown in the few years it’s been open, and now the brew is distributed throughout Southeast Alaska and other parts of the state. On occasion they’ll source locally harvested spruce tips and other flavorings for the beer, and they make their spent grain available to local gardeners for compost (bring your own container).

The BIBCO taproom has a variety of locally brewed beer available (Halibut Point Hefeweizen, Peril Strait Pale Ale, Medvejie Stout, Silver Bay IPA, Redoubt Red Ale, Baranof  Brown Ale, seasonal and special brews, and Ben’s Brew Root Beer for the kids and non-drinkers), pizza and other food, and a selection of BIBCO swag (t-shirts, refillable growlers, glassware, beer bread mix, soap, etc.). If you can’t stay for some food and liquid refreshments (note, there is a 36-ounce limit on alcoholic drinks served at the taproom, per state law), Wednesday is a good time to refill your growlers or buy some BIBCO swag for your family and friends. 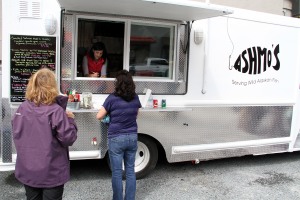 In addition to BIBCO beer, the Ashmo’s food truck will be at the event selling a variety of local fish items (fish and chips, salmon mac and cheese, black cod tips, fish tacos, salmon tacos, etc.). Ashmo’s, owned by Ashley Moore, is one of several new food trucks/carts operating in Sitka this summer. Watch for a feature about some of the new food trucks/carts later this week.

Parishioners from St. Peter’s By The Sea Episcopal Church held a Blessing of the Garden service on Wednesday, May 13, at St. Peter’s Fellowship Farm communal garden, where they prayed for a bountiful harvest from the garden used by the Sitka Local Foods Network to grow veggies for the Sitka Farmers Market, school lunch and food assistance programs, etc. The service was led by Kit Mellema, and as part of the rogation service tradition in the church the parishioners walked to all corners of the property as Rev. Julie Platson, the new priest in charge at St. Peter’s, sprinkled holy water on the various vegetable garden beds, trees and flowers. A photo slideshow from the service is linked below.

PLANTING A GARDEN: Sitka National Historical Park volunteer gardener Pam Vanderweele helps Baranof Elementary School kindergartner Arianna Moctezuma-Hernandez, 6, plant peas in the Russian Bishop’s House garden on a recent sunny morning. The kindergartners will return to the historical garden in the fall when they are in the first grade to harvest the crops and cook them in a soup. (Daily Sitka Sentinel Photo by James Poulson)

Rev. Julie Platson, the new priest in charge at St. Peter’s By The Sea Episcopal Church, will host a short “blessing of the garden” service at 5:30 p.m. on Wednesday, May 13, at St. Peter’s Fellowship Farm.

St. Peter’s Fellowship Farm is a communal garden located behind St. Peter’s By The Sea Episcopal Church (611 Lincoln Street). This communal garden is where the Sitka Local Foods Network grows most of the fresh veggies it sells at the Sitka Farmers Market, to local school lunch programs, on Chelan Produce weekends, and for food assistance programs.

“It will be a short service of prayers and blessings of the gardens and the work you do,” Rev. Platson wrote in an email to the Sitka Local Foods Network board of directors.

The church decided to host the blessing of the garden service as part of its usual Wednesday services, since this Wednesday is known as “a ‘rogation day’ in our tradition — a day to ask God’s blessings on gardens, farms, the labor and the work,” Rev. Platson wrote.

The third classes for the 2015 Sitka Local Foods Network garden mentor program have been set for three of our four participating first-year families, and the classes will be open to the public. The classes will be similar at each location, except one where we will be planting a container garden instead of our usual raised garden beds.

The third class of the six-class series is about garden maintenance (slug and pest control, thinning, watering, garden care, etc.). For our first-year gardener families, we teach them how to grow four hardy crops for Sitka — kale, lettuce, potatoes and rhubarb. These classes are essentially the same, so feel free to attend the class that best fits your schedule.

The class schedule and location for these three families is:

Please note the classes at the Dasalla residence involve container gardens instead of building raised garden beds like we’ve done for our other families.

This is the second year of the garden mentor program, and our two families from last year — Anna Bradley and Tami O’Neill — are back for a second year where they will learn how to grow a few more difficult crops for Sitka, such as carrots and onions. Their first classes recently were announced and take place in May. These classes also are open to the public.

Michelle Putz has been contracted to coordinate the program and design lesson plans, after the Sitka Local Foods Network received a community development grant from First Bank. We also have about a half-dozen experienced Sitka gardeners who serve as mentors for the program. For more information, please contact Michelle at 747-2708.