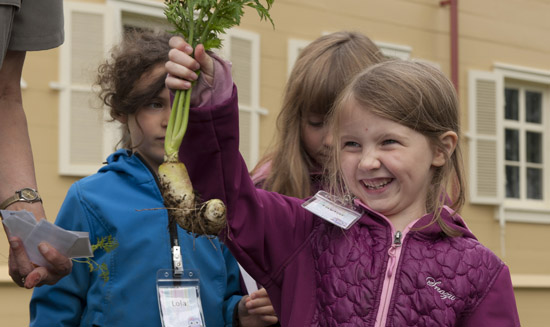 LITTLE HARVEST – First-grader Taylor McCarty, 6, holds up a slightly deformed carrot at the Russian Bishop’s House garden this morning (Thursday, Sept. 7, 2017). Students in Sarah Eddy’s Baranof Elementary School class and other first graders were harvesting the vegetables they planted in the spring when they were in kindergarten. This summer was not good for growing crops said Sitka National Historical Park Ranger Ryan Carpenter. Most of the carrots were only about an inch or so long. (Daily Sitka Sentinel Photo by James Poulson) 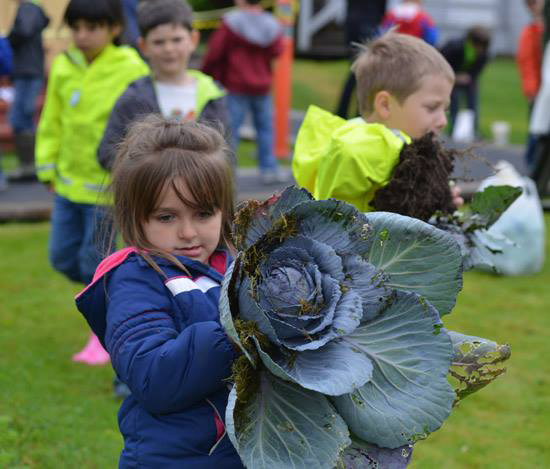 CABBAGE PATCH KIDS — Baranof Elementary School first-grader Alice Ann Ricketts, 6, carries a cabbage out of the Russian Bishop’s House garden Friday, Sept. 11, 2015. First-graders were harvesting the vegetables they planted last spring when they were kindergartners during the annual event. Teachers and students were planning on making a soup with their harvested vegetables. (Daily Sitka Sentinel Photo by James Poulson, this photo appeared on Page 1 of the Monday, Sept. 14, 2015, edition)

PLANTING A GARDEN: Sitka National Historical Park volunteer gardener Pam Vanderweele helps Baranof Elementary School kindergartner Arianna Moctezuma-Hernandez, 6, plant peas in the Russian Bishop’s House garden on a recent sunny morning. The kindergartners will return to the historical garden in the fall when they are in the first grade to harvest the crops and cook them in a soup. (Daily Sitka Sentinel Photo by James Poulson)

BIG HARVEST – Baranof Elementary School first-grader Marley Bayne, 6, holds up a large carrot and a beet next to the Russian Bishop’s House garden Wednesday. The entire first-grade class harvested the vegetables they helped plant in the spring when they were kindergartners. This year’s growing season was especially good for the garden crops, which children are using to make soup in class. Sitka National Historical Park rangers organize the gardening activities with the help of school staff and parent volunteers. (Daily Sitka Sentinel Photo By James Poulson)

The Sitka National Historical Park will host a garden party starting at 10 a.m. on Saturday, Sept. 13, at the Russian Bishop’s House garden.

Volunteer gardener Karen Christner and Ranger Jasa Woods will present a 45-minute program on the history of the Russian Bishop’s House garden and how its tradition is carried on today. During the spring, kindergarten students from Baranof Elementary School plant the garden. In the fall, the students return as first-graders to harvest the produce.

Attendees are invited early for hot tea and Russian tea cakes. Seating and shelter from the rain will be provided. For more information, call the Sitka National Historical Park visitor center at 747-0110.

Some 1,100 participants in the 2013 International Master Gardeners Conference were in Sitka on Wednesday, Sept. 11, when the Holland America Lines cruise ship Westerdam docked in town.

As part of the visit, the Sitka District office of the University of Alaska Fairbanks Cooperative Extension Service prepared a walking tour for the conference participants to show off local gardens and other highlights. The walking tour was a unique opportunity to showcase the challenges and methods used to garden in Sitka as well as interact with Master Gardeners from various locales. In addition to visiting Sitka, the Sept. 7-14 cruise took the conference from Seattle to Juneau, Glacier Bay, Sitka, Ketchikan, Victoria (British Columbia) and back to Seattle.

The Sitka walking tour started at Harrigan Centennial Hall and included a stop to look at apple trees by KCAW-Raven Radio, a stop at the Sitka Pioneer Home to look at the roses and other gardens, a stop at the Russian Bishop’s House (where kindergarten students from nearby Baranof Elementary School plant vegetables in the spring and harvest them in the fall when they return as first-graders). From there the walking tour went to St. Peter’s Fellowship Farm (where the Sitka Local Foods Network grows veggies to sell at the Sitka Farmers Markets), then it was on to the Sheldon Jackson Museum and on to Sitka National Historical Park. The final two stops were at a garden on the Sheldon Jackson Campus (between the Yaw Art Center and Hames Athletic and Wellness Center), and on to the US Geological Survey Geomagnetic Station and UAF Cooperative Extension Service demonstration plots (at the site of the original USDA Sitka Experimental Farm (Page 7), which was the first in Alaska and had more than 100 acres of crops from 1898-1931).

Also at Harrigan Centennial Hall, Sitka filmmaker Ellen Frankenstein hosted a couple of showings of her movie “Eating Alaska,” which examines the food choices one makes, especially when they live in Alaska where produce can be marginal but fish and game are widely available.

In return for this low-cost education the MG participants provide 40 hours of service to their community using Cooperative Extension information resources from their home states. The MG service may be in food gardening, pest management, youth gardening, tree and landscape care, public gardens, etc. Since the initial Seattle project, Master Gardener programs now exist in every state in the U.S., as well as Canada, Australia, New Zealand, and other countries. A Master Gardener course was taught in Sitka in April at the University of Alaska Southeast Sitka Campus.

There will be a planning meeting at 7 p.m. on Tuesday, Aug. 21, at the University of Alaska Southeast-Sitka Campus for local activities related to the 2013 International Master Gardener Conference.

The International Master Gardener 2013 Conference will be aboard the Holland America cruise ship MS Westerdam, which will stop in Sitka from 7 a.m. to 3 p.m. on Wednesday, Sept. 11, 2013. Conference planners expect more than 900 passengers on the Westerdam will be registered for the IMG conference.

Local IMG conference activities will complement existing commercial cruise ship tours and activities. Examples of possible gardening activities for the IMG Sitka stop include a self-guided tour of the Sitka Pioneer Home, Russian Bishop’s House and downtown gardens, several repeating presentations on Sitka gardening past and present at Harrigan Centennial Hall, a bus tour of Sitka gardens, and a guided tour of the Forest and Muskegs Trail at Old Sitka Historic State Park near Starrigavan Bay. All groups and individuals interested in planning activities for the 2013 IMG Sitka stop are invited to the planning meeting on Aug. 21.

For more information, call the Sitka office of the University of Alaska Fairbanks Cooperative Extension Service at 747-9440.

Monday’s edition of the Daily Sitka Sentinel features a photo of Baranof Elementary School first-grader Keaton Kelling, 7, holding up a couple of potatoes he dug up from the Russian Bishop’s House garden on Thursday. First-grade students from Baranof Elementary harvested crops of peas, potatoes, carrots and other vegetables they planted last spring when they were kindergarten students. Most crops did well this year. (Sentinel Photo by James Poulson)

There were several other local food stories in Alaska newspapers over the weekend. Here’s a quick rundown.

Click here to read a story from Sunday’s Juneau Empire that features an Alaskanized version of a recipe for “salmon maritako,” a stew made by Spanish fishermen. The article is by Ginny Mahar, a chef at Rainbow Foods who also writes the Food-G blog. Many of the recipes Ginny posts on her blog include local, Southeast Alaska ingredients.

Click here to read Wednesday’s Anchorage Daily News gardening column by Jeff Lowenfels about now being the time to prepare plants for winter. Most of the column deals with flowers, but he does have some info about preparing tomato plants for the winter at the end of the column.

Click here to read an Associated Press story posted on the Anchorage Daily News Web site on Monday about how hoop houses (a low-cost type of greenhouse that uses plastic on a frame) are extending the growing season for urban farmers in northern climates. The version of the story on the ADN site didn’t have any photos of the hoop houses, so click here to see a version with photos.

Click here to read a transcript from National Public Radio of a story about two Walmart truckers who drive 2,600 miles one way from an Oregon warehouse to Alaska each week to deliver produce to Alaska stores. That’s a long way to transport a piece of lettuce or a carrot we can grow in Alaska, and that distance doesn’t include how far the produce had to travel to get to the Oregon warehouse before being trucked to Alaska. The story originated from the Alaska Public Radio Network, which has the story in streaming audio on its site.

Finally, click here for a humorous column from the July 2009 Field and Stream by Scott Bestul comparing the taste of Grade A Choice Holstein beef vs. wild venison when both are prepared the same way. This isn’t really a local story, but deer hunting season is coming soon in Southeast Alaska.

Do you support the local foods movement in Sitka? We are recruiting new board members and volunteers for 2020. Click the photo to learn more about us, or attend our next board meeting at 6 p.m. on Wednesday, Jan. 13, using Zoom online meetings.