People living along the Pacific Coast, including in Sitka and Southeast Alaska, have been wondering about the impacts of radiation in the food supply ever since the March 2011 earthquake in Japan and Fukushima Dai-ichi nuclear power plant meltdown.

Dr. Lee Cooper of the University of Maryland, a Scientist in Residency Fellow at the Sitka Sound Science Center, will discuss the current state of the science on Fukushima radiation and its likely impact on the Gulf of Alaska during a brown-bag lunch presentation from 12:30-1:30 p.m. on Friday, March 14, at the Sitka Pioneer Home Chapel. Bring your lunch and questions to the presentation, which is sponsored by the Sitka Sound Science Center and the National Science Foundation.

According to the Sitka Sound Science Center:

It is projected that dissolved contaminants, particularly the radioactive isotopes of cesium, 137Cs and 134Cs from the Fukushima Dai-ichi Nuclear Power in Japan, will reach Southeast Alaska this year.  Because the amount of radiation released is uncertain and the accident site is still leaking to some extent, it is difficult to know exactly what the peak concentrations of radioactive cesium will be in local waters, but it is not likely to exceed levels that were observed during the bomb fallout era 40 to 50 years ago. Cesium is chemically very similar to potassium, which is a common ionic salt in seawater, so fortunately the concentration of cesium into the foodweb and into seafood harvested for food is comparatively modest.

Nevertheless, it is important to put into perspective the potential risks involved and communicate this to the public. This talk will summarize the newest scientific information that is available on the impacts of the accident, based upon a special session held in late February at the Ocean Science Meeting in Honolulu and attended by scientists studying Fukushima impacts, ranging from Japan and East Asia to the Woods Hole Oceanographic Institution. 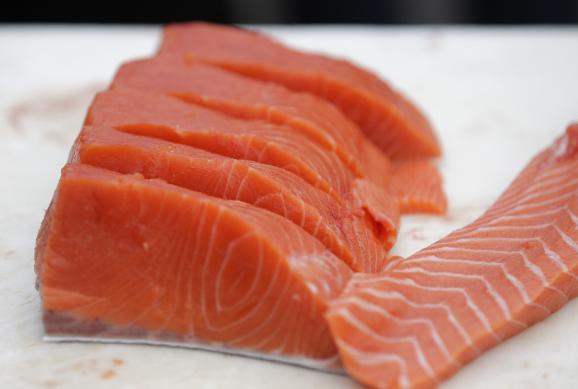 Alaskans have been worried about their seafood ever since the March 2011 Fukushima earthquake and Japanese nuclear plant problems. It’s understandable that Alaskans are concerned about the safety of the seafood, seaweed and marine mammals in the area. But Alaskans also should note that most of the information posted on social marketing sites just isn’t true.

FALSE IMAGE: TSUNAMI WAVES, NOT RADIATION: Many people have posted on social media that this NOAA map shows the path of 300 tons of radioactive material entering the ocean each day. This map really shows the probable tsunami wave heights from the 2011 Tohoku earthquake.

One of the biggest examples of false information usually is accompanied by an official-looking map from the National Oceanic and Atmospheric Administration (NOAA) and a note that each day the map shows 300 tons of radioactive material entering the water each day. The map is an official NOAA map, but it doesn’t show radiation. It actually shows the probable tsunami paths from the 2011 Tohoku earthquake. When in doubt, or even if not, don’t be afraid to consult one of the myth-debunker sites such as Snopes.com, which has the details on the real story behind this map.

The Sitka Local Foods Network has been following the situation since it happened, and we even posted an update in March 2012 in hopes of easing people’s worries (many of the links on this page have been updated). The Alaska Department of Health and Social Services also has a site with updates.

In recent weeks, Rep. Jonathan Kreiss-Tomkins (D-Sitka) did some research, interviewing Dr. Ken Buesseler of the Woods Hole Oceanographic Institution and one of the country’s top researchers on oceanographic radiation. Rep. Kreiss-Tomkins posted his findings in his Jan. 8 constituent newsletter, and that write-up also appeared in several Alaska publications such as the Alaska Dispatch.

Also in January, Alaska Department of Environmental Conservation Commissioner Larry Hartig gave an update to the Alaska Senate’s Natural Resources Committee about what it’s doing to track the radiation, and he said so far the DEC hasn’t seen anything to cause concern. The Ketchikan website Stories In The News also had a follow-up story that included information from Hartic’s testimony and an update from Buesseler, who announced the launch of a new “How Radioactive Is Our Ocean?” website to help crowd-source information about what’s happening along the 5,000-mile Pacific coastline.

Taking things a step further, in January a couple of Seattle media organizations — KPLU and the Seattle Times — ran stories about Seattle fish-broker Loki Fish Co. ran its own tests on Alaska seafood. After the testing, the folks at Loki Fish Co. decided Pacific salmon is safe to eat.

Do you support the local foods movement in Sitka? We are recruiting new board members and volunteers for 2020. Click the photo to learn more about us, or attend our next board meeting at 5:30 p.m. on a date TBA in July or August, using Zoom online meetings.